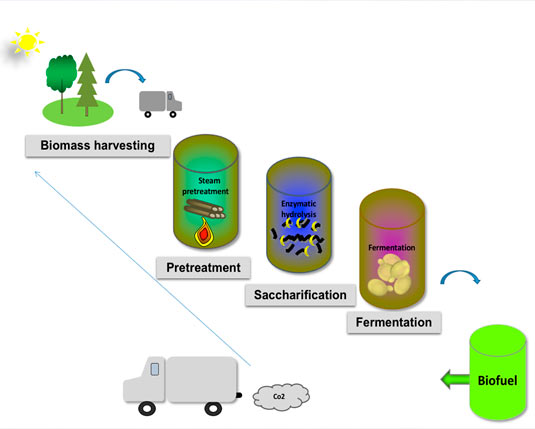 Currently available industrial ethanol production technology is based on the utilization of sugar cane or corn starch, which also represent valuable products in the food market. This leads to a competition for sugar-rich feedstocks between the biofuel and food sectors. In order to ensure food security (especially with the world population growing with a parallel increase in energy consumption), alternative substrates must be found and biofuel production technologies must be improved. In this context lignocellulose can provide a low-cost, renewable and widely accessible alternative energy source. The atypical ethanol production yeast Dekkera bruxellensis can utilize a wider variety of sugars in pre-treated lignocellulosic materials than regular brewer’s yeast, which would make D. bruxellensis more suited to the production of ethanol from lignocellulose. Fermentation of lignocellulosic hydrolysates is stressful for yeast cells due to the toxic compounds released during pretreatment of lignocellulosic biomass (organic acids, phenolic compounds and furfural aldehydes). In order to adapt Dekkera bruxellensis to lignocellulose hydrolysate conditions,  a set of cultivation protocols were developed. Cells that had been adapted to lignocellulose hydrolysates grew faster and produced higher ethanol yields as compared to non-adapted cells.