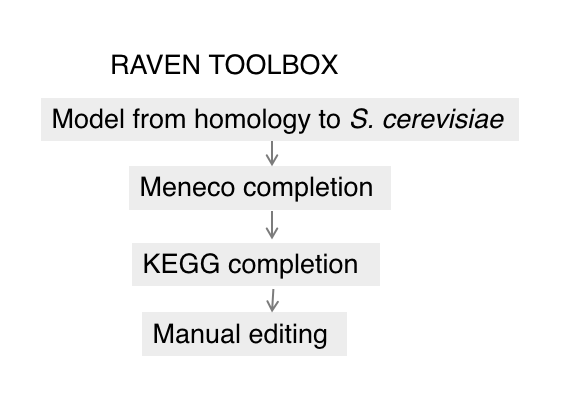 Generation of a genome scale metabolic model (GEM) of Rhodosporidium toruloides would provide a deeper understanding of oleaginicity and facilitate the design of genetic engineering strategies. We have used the RAVEN toolbox to create a first draft GEM of R. toruloides based on protein homology to Saccharomyces cerevisiae model yeast 7.6 and to Yarrowia lipolitica model iYali4.01. Unlike S. cerevisiae, R. toruloides contains a gene encoding ATP:citrate lyase, which is the main source of acetyl-CoA for lipid synthesis. In addition, a mitochondrial beta-oxidation pathway provides additional source of acetyl-CoA in this yeast. Unlike Y. lipolytica, R. toruloides expresses a cytoplasmic malic enzyme that provides an alternative to NADPH generation through the pentose-phosphate pathway. The model was used to simulate lipid production in R. toruloides on both glucose and xylose substrates. The reaction of phosphorolytic cleavage of xylulose-5-P by phosphoketolase with generation of acetyl phosphate and glyceraldehyde-3-phosphate was shown to enable efficient conversion of xylose into lipids.